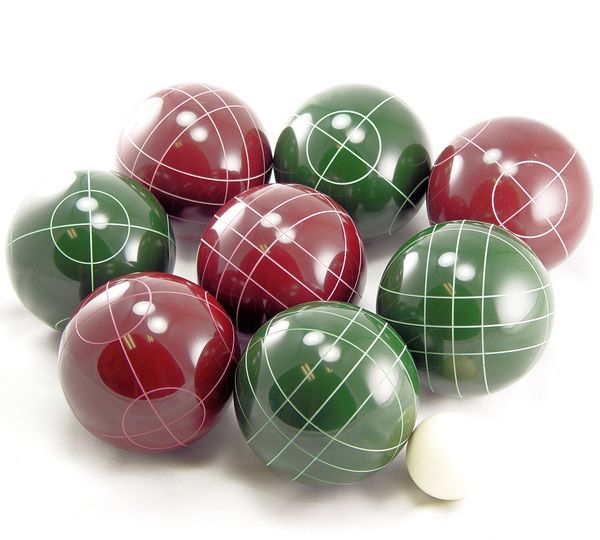 Rocco Mancini, Silvio Abruzzese and Santa Abruzzese blitz opposition to win back title as the Top RAFFA Triples team in Australia, winning the title for the third time – 2018,2016 & 2015.

What an amazing two days of Bocce Raffa extravaganza supported by lead sponsor Liverpool Catholic Club, Sydney, played over the weekend, Saturday 27th and Sunday 28th January and brought the best of the best Bocce-Raffa players to Sydney for the 11th Australian Bocce Raffa Open, with 13 teams participating in the mixed triples event. Teams were from NSW, Marconi Club, Liverpool Catholic Club, and Sydney Kings Club and from Victoria Melbourne Metro, Brunswick Bocce club and Regional Victoria, Morwell Club. The game is similar to Bocce Bowls, but the bowls are of plastic material and the player can bowl or throw to knock the opponent’s bowls away and make a point close to the jack, or with a low toss bounce the bowl to displace the opponents bowl.
The Triples teams, each of two men and a woman player competed for the $3000 prize pool and the opportunity to represent Australia at the next World Championships.
The popularity of the event necessitated the host club, the Liverpool Catholic Club in Sydney, NSW, to prepare all 6 courts to ensure that the RAFFA OPEN was completed within the programmed two days.
Tony Biancacci was the MC for the presentations and opened the proceedings by thanking the Liverpool club for their generous sponsorship of this event. Frank Funari the President of the Bocce Federation of Australia congratulated Lucky Legato, Liverpool Catholic Club Bocce President, Joe Rozzo, NSW Federation Bocce President, the players and officials on participating in the weekend’s Bocce Raffa Open. Also special thanks to Chief Referee Franco Fava and the many volunteers that helped to make such an event a great success. Frank went on to mention that the event was a first for many things such an all women’s tournament directorship thanks to Tournament Director Mary Massena, and Assistant Tournament Director Sandra Samsa; Beach Bocce demonstration organized by Lina Cher was a great hit amongst the locals on the make shift beach at the back of the boccedrome and the Raffa Open being webcast for the first time with each session averaging 160 views and a peak of 367 views of the replays on Sunday. Replays of the games are still available and can be seen on the Bocce Australia Facebook page https://www.facebook.com/bocceaustralia/.

Also present was World Raffa VP, Raymond Cher who was most impressed with the competition and the many new players that had taken up this Raffa code as their Bocce game of choice. Raymond thanked the Club for their sponsorship, hospitality and fantastic sporting facilities. Raymond made mention that the World Raffa governing body the CBI (Confederazione Boccistica Internazionale -RAFFA), was considering a World International Men’s Club championship later this year, most probably to be hosted in Italy.
Raymond mentioned that the Championship was a great success for the players and the many Bocce spectators, especially those that enjoyed a holiday as well as watching or playing bocce. The success and growth of this Championship was due to the vision of Bocce Australia in expanding the Raffa Bowl game, and making it a major event on the Australian Bocce calendar. Club support and sponsorship along with club bocce volunteers make such events happen and it is thanks to those dedicated people that work tireless in the background that make Bocce Raffa a success.

Overall, the tournament turned out to be a battle between the Victorian teams and the teams from NSW. All games were of a high standard with the highlight games this year being the quarter finals where the competitive intensity took a step higher and had the spectators on their toes as the teams from Morwell, Victoria and Sydney competed against the each other.

Of the 13 teams, the following teams qualified to the quarter finals, Liverpool CC 1 – Tony Diaz, Lorry Vittori, Marica Furlan; Morwell 2 – Maria Maselli, Joe Maselli and Gino Montuoro; Marconi 1 – Joe Rozzo, Catarina Morganti & Giuseppe Morganti; NSW 2 – Daniel Samsa, Nicole Samsa, Jasmin Zouroudis; Morwell 1 – Franco Fava, Diane Penney and Nick Penney; Liverpool CC 3 – Miko Kovacevic, Vida Grlj, Silvano Brentin; Marconi 2 – Anne Fiorevanti, Uvan Desanti & Giuseppe Maraffa; NSW 1 – Rocco Mancini, Silvio Abruzzese, Santa Abruzzese
In the Round Robin (Pool A) section of the Championship, from the first game it was obvious that the current title holders the team from Morwell 1 – Franco Fava, Diane Penney and Nick Penney were on fire and only dropped one game in the Round Robin section to local team Marconi 1 – Joe Rozzo, Catarina Morganti & Giuseppe Morganti. While in Pool B, the NSW 1 team of Rocco Mancini, Silvio Abruzzese, Santa Abruzzese, were on a mission to prove that they are the best Raffa team in Australia. They blitzed the field winning all games and drawing one game, to top the pool. Local hot favorite team NSW 2 of Daniel Samsa, Nicole Samsa, and new comer to the game Jasmin Zouroudis were in good form and qualified to the quarter finals as second in the pool B. Also in the pool were a determined Morwell 2 team of Maria Maselli, Joe Maselli and Gino Montuoro, who were steadfast on making it to the final. Before the start of competition when interviewed by BocceAustralia Facebook Live web stream, Gino stated that “…he was on a mission to making it to the final and hopefully to qualify again for a 3rd international cap” and he was spot on with making it to the Final.
It was good to see two new teams this year, the Sydney Kings from NSW and Brunswick from Victoria. Although they had modest success, as Frank Funari mentioned on Live Stream, it is all about the participation and the growth of the sport.

The surprise team this year was the Liverpool CC 3 – Miko Kovacevic, Vida Grlj & Silvano Brentin. Also from Liverpool CC team 1 of Tony Diaz, Lorry Vittori, and Marica Furlan put in good performances. Likewise the Marconi 2 team of Anne Fiorevanti, Uvan Desanti & Giuseppe Maraffa. They all played superbly to qualify to the quarter finals only to be beaten by the power teams.

The two games that were of disbelief, were the losses by last year’s winners Morwell team 1 of Franco Fava, Diane Penney & Nick Penney and the NSW 2 team of Daniel Samsa, Nicole Samsa, and Jasmin Zouroudis. Both teams in commanding leads only to loose by 2 pts & 1 pt respectively and missing out on a semifinal spot.
The Semi-finals had four different teams, one team each – one from Morwell with team 2 of Maria Maselli, Joe Maselli and Gino Montuoro, one team from Liverpool, Liverpool CC 3 of Miko Kovacevic, Vida Grlj & Silvano Brentin;, one from Marconi with team 1 of Joe Rozzo, Catarina Morganti & Giuseppe Morganti, and the NSW 1 team of Rocco Mancini, Silvio Abruzzese,& Santa Abruzzese.

With straight wins in the semifinals to Morwell 2 team and hot favorites NSW1 team the final was set to be a real tussle between the two Raffa power base clubs of NSW and Morwell, Victoria.
These two Bocce Raffa power teams hit the courts, determined to get an early lead and it was the Morwell team of Maria Maselli, Joe Maselli and Gino Montuoro that did best as they were more focused and jumped out to a quick lead. They maintained it throughout the first couple of ends but on the fourth end NSW 1 team of Rocco Mancini, Silvio Abruzzese, Santa Abruzzese, made 5 points and basically stopped the Morwell team dead on the court and from advancing further than 4 pts. NSW 1 team maintained the rhythm winning the remaining ends as they notched up point after point to totally demolish the opposing team and winning the championship with a score of 12 points to 4points.

Thanks to the Liverpool Catholic Club, Lucky Legato and his team of volunteers of the Liverpool Catholic Club Bocce sub-committee for their hospitality and friendship shown in helping to make this a great success. Also thanks to Tournament Director Mary Massena, assistant Tournament Director Sandra Samsa, Technical adviser Tony Biancacci, all the Team Captains, the players, Photography Raymond Cher, and Beach Bocce organizer Lina Cher. Also a special mention to the volunteers who have contributed to the preparation & organization of the Raffa Bowl Championship, especially for all those wonderful cakes provided by the many Liverpool Catholic Bocce committee volunteers– thank you from all the players & Bocce Australia. 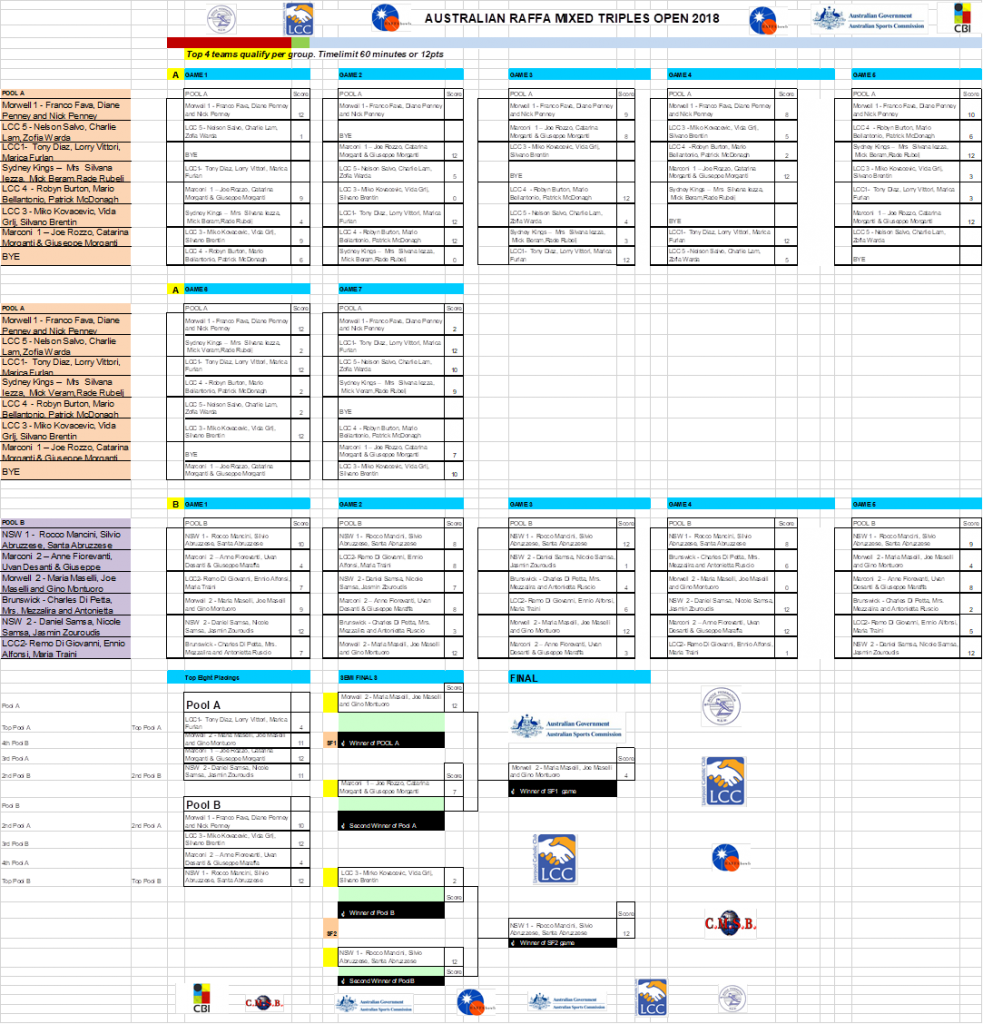