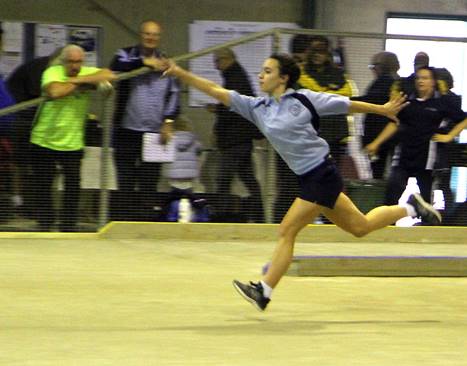 The European Challengers Have Arrived!

The Asia/Oceania Junior and Under 23 Bocce Invitational Championship teams face a new and formidable challenger from Europe!

The Monegasque team of Victor Leporati, Gianni Bresciani and Alan Velli led by coach Gilles Campiglia, have travelled 16,410km to compete in this prestigious junior bocce event and representing the European powerhouses of bocce – they are here to win!

Last year Australia’s Negovan Novakovic and Eva Scoble competing in the under 15 section of Monaco’s Denis Ravera International Bocce Challenge came up against the full force of the Monegasque trio on their home turf. This year, the Australians along with our Chinese competitors intend to control to control the game!

Nicole Samsa (NSW) in full flight as she launches the bocce bowl.

The contest will be fiercest in the throwing events – with China and Australia neck-a-neck in experience in both the Under 18 and Under 23 divisions, it will exciting to see what the Monegasques bring to the table.

Live Telecast will be:

Where: At the Casa D’Abruzzo Club Bocce Dome, 55 O’Hearns Road, Epping, Victoria 3076
Facilities: Eight lane Boccedrome with full bar and restaurant service
When: On the Friday night 27th April, then all day Saturday 28th and finishing on Sunday 29th.
Presentations: On court on Sunday 29th at 3:30pm (Melbourne Time).
Webcast live on: MySportlive.tv and simulcast via Bocce Australia or Bocce Victoria Facebook

The Championships are organized by Bocce Australia in conjunction with the Victorian Bocce Federation and the host club, the Casa D’Abruzzo Club, Epping with support from Australian Sports Commission and Department of Sport Victoria, including BonFoods and Biviano Fresh Fruit.