Rules of the game

The game is played on sand on a flat (levelled) surface of 10 metres in length and a width of 2,5/3 metres in which are placed four target circles of different diameters. The area must be cordoned off with coloured ropes.

The game consists of throwing a bowl into a circle, in compliance with the provisions of Article 3.

The singles player must make four throws, one in each of the target-circles, starting from the largest circle then continuing, on from circle to circle, down to the smallest – after the score is confirmed, the first player’s bowls are removed and then it’s the opponent’s turn to make four throws. Every player in a doubles team must make two throws, alternating with their teammate, respecting the same sequence of target-circles as for the singles match.

The teams take it in turn to play to the designated target-circles.
The winning team is the team that has achieved the highest score according to the scoring table set out below in item 4.

Instructions & Purpose of the Game

The 4 target-circles of differing colours are placed in the following way:

Once the team drawn to play first has finished playing their bowls and a score has been declared the second team, commence playing to the same target-circles. The game proceeds on the basis of the predetermined turn of play on the target-circle of 40 cm., diameter down to the smallest target-circle of 20 cm. diameter.

Example of a Target Circle Layout on the Ground 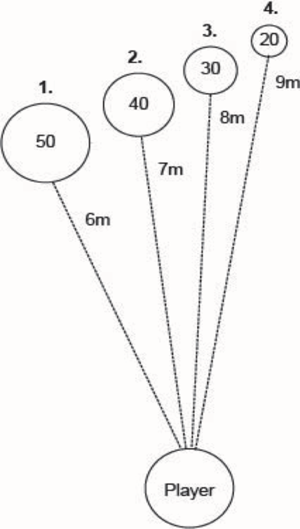 Validity of The Play