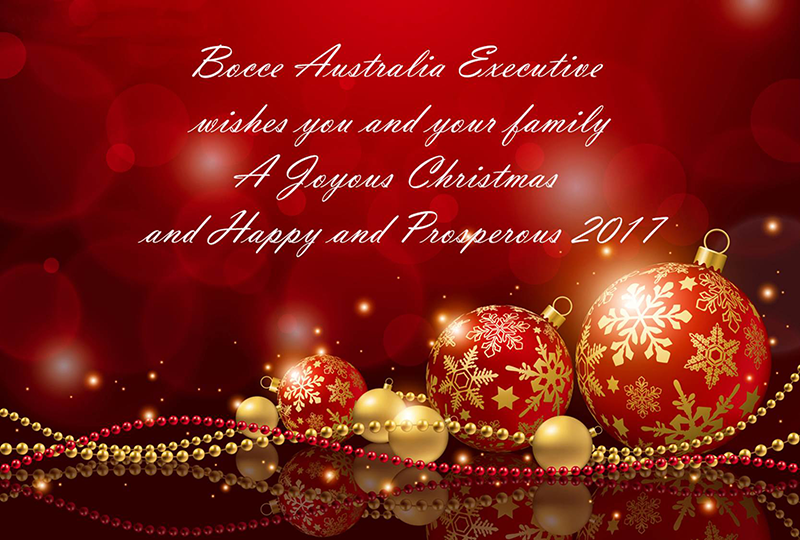 On behalf of everyone at Bocce Australia, I’d like to thank you for your support this year. Whether you volunteered, sponsored or participated or officiated or coached at one of our championships, workshops or other events – all your efforts have contributed to the awareness and ongoing success of the sport of bocce in Australia.

This year, you may have experienced the contest at the National Bocce Raffa Open or the international flavour of the inaugural Asia-Oceania Junior Championship and who can forget the rivalry exhibited in Shepparton of Victorian competitors fighting for a place to represent their State at the Nationals. You may have witnessed the clash of the state titans at the National Championships at the Liverpool Catholic Club – voted a winner by all involved!  While the struggle on the courts at the Morwell Classic is intense on court, the loyal contenders claim it’s friendship that keeps them coming back.

Let’s not forget the many State and National bocce competitions sponsored by generous donors and clubs at our many affiliated clubs in metropolitan and regional areas including – My Chemist challenge and many others at the Casa D’Abruzzo, Marconi Cup, Cooma Cup, the many sponsored events at the Campania and other SA Clubs. The Victoria vs.Tasmania battle or the many contests held in WA and across Queensland ensures that bocce competitions at all levels of ability, including our Special Olympics and Paralympics continues to thrive.  Bocce also enjoyed some relaxed moments with involvement at food and wine festivals, carnivals and in trendy bars and pubs around Australia.

The enthusiasm and eagerness of youngsters participating in bocce holiday programs and school competitions and activities at our Clubs augurs well for the future of the sport.  2016 ended on a high for juniors, with the participation of Australia at the World Juniors and Under 23 Bocce Championships in Monaco, congratulations to Ivan Pepe, Nicole and Daniel Samsa and coach, George Milic for their fantastic efforts!

Victoria earned its reputation for the innovation state with the launch of Beach Bocce on Victorian beaches and the ushering in of the Bocce Smash trials!

My Bocce Australia colleagues Frank Funari and Tony Biancacci would like to acknowledge the outstanding work of our State Federations with the tremendous support of our Club network.  To you and to all those who have worked and served the sport of bocce this year, we say thank you!

Wishing you and your loved ones a very happy festive season and a prosperous New Year! We look forward to seeing you at a bocce activity again soon.

Click here to enjoy some of the Highlights from 2016.